The Disability Integration Act — originally introduced in 2016 by Sen. Charles E. Schumer, D-N.Y., and F. James Sensenbrenner, R-Wis. — prohibits states or local governments that provide institutional placements for individuals with disabilities who need long-term assistance, and prohibits insurance providers that fund such long-term services, from denying community-based services that would enable such individuals to live in the community and lead an independent life.

Without this in place, people who are eligible for services could be forced into nursing homes or other institutions by their insurance. This legislation ensures that disabled Americans have a right to live and receive services in their own homes.  It prevents people with disabilities from being forced into expensive institutional settings because of government regulation.

The Disability Integration Act also requires public entities to address the need for affordable, accessible, integrated housing that is independent of service delivery.

Watch parties were held at Centers for Independent Living and other advocacy genies throughout the nation. One was held in my office.  We came together with excitement and a tremendous determination to get the D.I.A. passed in the 116th Congress.

A little historical perspective.  The D.I.A. was crafted from 25 years of work dating back to the signing of the Americans with Disabilities Act.  The original legislation was first introduced by Speaker Newt Gingrich (R, GA).  Yes, the stalwart of Conservative value and fiscal policies first introduced the basis of today’s D.I.A..     Gingrich saw the value of keeping people with disabilities and seniors out of nursing homes.

Unfortunately, today’s Speaker of the House, Nancy Pelosi (D, CA), has ignored requests for two years to   become a co-sponsor of the D.I.A. Yes, this champion of Liberal ideas and fiscal policies and her immediate party subordinates have shamefully not responded to the disability community’s requests.  This is the same person who lauded people with disabilities who put their bodies on the floor to stop the repeal of Obamacare.

My point is the Disability Integration Act cannot be looked at through Liberal or Conservative perspectives.  It has an elements of both because it saves taxpayers and insurance company’s money while keeping people living with both freedom and support. 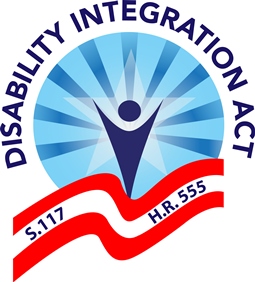 So far, three of New Jersey’s congressional representatives have signed on as co-sponsors. They are: Sen. Cory Booker, Rep. Bonnie Watson-Coleman, and Rep. Donald Payne.  I hope to name more next month as I use my personal Twitter account to “recruit” co-sponsors from our state.

There is great expectations that the D.I.A. will pass this year.  I expect passage in the House but not in Senate this time, but we shall determine if grassroots advocacy by people who cannot walk, talk, see, or hear works again!