April brings the beginning of warmth, some booming flowers, and thoughts of what to wear to high school proms. This can be an anxious time for some young ladies, but an event held at Freedom Village at Toms River may have relieved some this anxiety for some.

Around 30 young ladies from neighboring towns came to browse, try on, and leave with any gown of their choice for free, thanks to the efforts of Maria Paradiso-Testa.

“All gowns were donated,” said Paradiso-Testa, who is a professor of Education at both Monmouth University and Georgian Court University, a community activist, and a minister/chaplain.

“I have been a community advocate for many years,” said Paradiso-Testa, “ volunteering wherever the needs of the people are. My daughters always help and support all projects; they both suggested that their gowns be donated to students for their prom.”

From there, this idea grew to an event. .

“As we discussed this further, we decided to ask around,” Paradiso-Testa continued, “ and in less than two weeks, over 100 gowns were donated. There are a lot of good people with big hearts who are willing to help others, and we all work together!” 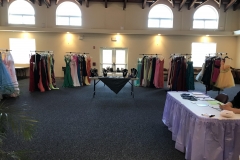 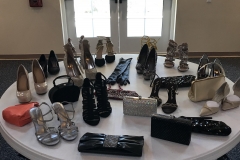 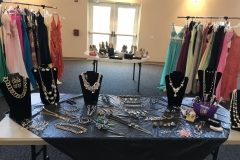 “Shoes, purses, and jewelry were also donated,” she continued. “Most came from individual people, word of mouth, social media advertising, and personal requests.”

Then the event needed a venue. Last year Paradiso-Testa sponsored a Women’s Seminar. “One of the women working with me suggested Freedom Village Community Center because she lived there. We hosted the seminar, and all the people who came loved the center.”

For the prom-gown event “the Freedom Village Community Center location provided a safe, pleasant, and beautiful environment for the girls to come with their friends, parents, and grandparents to have the shopping experience, that was definitely priceless,” added Paradiso-Testa.

Project Freedom’s Toms River management team, Laurie Solymosi and Joyce Cocco, were present throughout the day with Cocco volunteering many hours to the event.

“Special thanks to Joyce Cocco, who assisted from the beginning through to the very end,” offered Paradiso-Testa. “Joyce offered her assistance, provided multiple gowns through sharing her resources, and was a tremendous help the day of the event.”

“If it wasn’t for the opportunity provided through Freedom Village at Toms River, this unique experience would not have been such a great success,” said Paradiso-Testa. “The smiles on the girls faces made everything complete.”