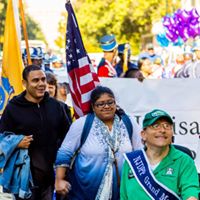 Our nation celebrates its Declaration of Independence from Great Britain on July 4th.  We celebrate the idea that this nation wanted to be free from rules, regulations, and laws created without input from the Colonies.  This year the celebration will be different for me.

We will try celebrate the concept that each person has equality in the eyes of the law even though we know that it is not reality for many.  People are treated differently     because of skin color, race, gender, gender identity, age, and, yes, disability.

I live with a disability, so I focus on those inequities in my writing.  Nevertheless, the struggle for racial equality has never been far from my life. I lived in Philadelphia in 1962 at a school for kids with disabilities.  The direct care staff was made of African-Americans, and I remember watching the Civil Rights struggle on the TV news with them.  I remember their tears and their quiet anger.  I remember trying to make sense of why black people were being beaten.  It didn’t make sense to me.

The turbulent 60’s went by with all the racial, social, and political strife, and in the mid-70s I found myself at Long Island University riding an elevator with a schoolmate.  The schoolmate was black, male, and in NYPD handcuffs.   I knew him well since we served on the Dorm’s Council together.  He was arrested by a white police officer for (I later learned) a minor charge.  My schoolmate said something to me in greeting and was promptly shoved violently against the elevator wall by the officer.

I was shocked and angered.  My schoolmate later returned to warn me not to say anything about the shoving.   He said it would make his case more difficult. I agreed, but this incident opened my eyes to what “equality under the law” actually means.

We must also remember that the fight is not over for many people. Expecting the promise of freedom to be obtained or kept without struggle and sacrifice is foolhardy. Our history teaches that participatory governance over oneself or one’s country means stepping up to participate and sacrifice.  Individuals must take up the cause of freedom, work together, and battle for the promise to be kept.  This is true now for many people with and without disabilities.

So, while we celebrate what happened 244 years ago, let us remember for many of us the struggle for freedom continues!