Last month, in the midst of leasing up our new “ Freedom Village at Town Center” apartment complex, we welcomed Robbinsville mayor David Fried to our community to celebrate a special achievement.  It was to honor and recognize a Robbinsville Freshman, Zoya Jadhav, for winning second place in a Statewide Essay contest.  For her achievement, Zoya won a $ 300 cash prize but donated half of her winnings to Project Freedom, which is really the big part of this story.

As many of you know, Mayor Fried is very proud of his town, Robbinsville, and especially proud when his students from the town, achieve success, and wanted to recognize Zoya for her achievement.  Since she wanted to donate half her award to Project Freedom, he reached out to us, to see if we could host a small gathering to recognize her and give her a Town citation.  Of course we said yes, and so staff prepared some light refreshment and welcomed the mayor, Zoya and her family to our new Community Center.  What also made that day special was that it was Zoya’s 15th birthday.

It was quite evident to me, in talking to Zoya’s family that they are special people and that Mom and Dad are raising their children to very high standards.  When I asked Zoya what she would like to do with her life, she said that she wanted to become a doctor.  Indeed the story that she wrote, was about a young person who was sick with the Covit 19 virus, and ended up in the hospital.  There, she encounters another child, Charlie, who is chatty and annoying at first, but then also comes down with the illness.  They are now both struggling to hold on and breathe, and form a bond and friendship as they fight this terrible disease.

Her story is fictional yet has a basis in reality for many of those folks who have suffered with this terrible pandemic.  The loneliness, the separation from family, the soreness of having an IV in your arm and the sounds of those hospital monitoring machines, all created a vivid picture of her torture.  Her story is told, one paragraph at a time, with the headings of “ One. Two “ which I think was to mimic the rhythm of those hospital sounds. Yet it is a story of friendship that will ultimately win out.

The title of her story is “Amity Amidst a Crisis” which means friendship during a crisis, and becomes the ultimate relationship the two sick children forge as they fight to breathe.  So although fictional, her point here is that during times of crisis or major life-changing conditions, we as human beings put aside our petty differences and come together to survive.  We respond to each other and will help each other to overcome those challenges to survive and make a better life.  What a mature thing for a 15-year old student to understand and capture in a story.  The  essay can be found on our website  by Clicking Here

Looks to me that Zoya has a talent and bright future as a writer if that doctor thing doesn’t work out. I think many of us “Adults” could learn a thing or two from her.   Happy Birthday, Zoya.

Note: This is an award-winning essay in a statewide Arts and Writing contest by Robbinsville High School student Zoya Jadhav who chose to donate half her price to Project Freedom Inc.

Amity Amidst a Crisis

The blight had washed over the world altogether. Life at an oblivious state hadn’t quite anticipated a detriment of this scale. Many were left at complete losses while others, joyous of the leisurely time left available on their hands. Many like myself, once enjoyed the break from life, however, grew to become lonely and deprived of the socialization that is imperative for human beings to function.

It was once estimated over 70% of the population would become victims of this harrowing coronavirus. This certainly proved true for almost a year. People dropped dead like flies and became prey to the predatory virus. People like me, who coerced themselves that they would be spared, fell and landed the hardest.

I lied in a crisp hospital bed, pondering the cause of my current state. IV’s pricked at my skin, leaving my arms sore for days. My eyes were heavy, and I was unable to keep them open. Doctors scurried and nurses followed, masked up and sealed. Protected from me. The busy ambiance left me feeling isolated, even though the environment was far from that of isolation.

A blue curtain with bumps and ridges along its body enveloped me and shielded me from what lied beyond the hospital bed I was in. I contemplated: Were there others like me? Was my family here to visit me? Or perhaps, I was just dreaming? These questions lingered day and night as my lungs deteriorated day by day.

Faces became blurry and all I could see was the blue curtain. Days passed slowly. With each second, of every minute, of every hour, it became harder to breathe. Over a few days, I heard rustling outside of the curtains. Though I couldn’t taste or smell, my hearing senses had remained untouched.

It was only a week later that I had discovered what truly lied behind the curtain. A vibrant voice tore through,

“Hey, anyone there? I’m Charlie, what’s your name?”, it asked. Much to my dismay, it was a child.

“No,” I replied briefly.

“Oh what a lovely name! Nice to meet you No!” the voice squeaked. I immediately rang for a nurse and requested to move away from the bothersome child.

“I’m sorry Cynthia, given your condition, it isn’t possible to move all this equipment. You’ll just have to deal with it,” the nurse refused.

Though they were heavy, my eyes rolled and burned with hatred for the nurse. I turned on my side, away from the curtain, using the pint of energy I had left.

Day by day, the child began speaking to me. Regardless of whether I responded or not, he went on and on about himself, his likings, his family, and even included what he disliked. I thought hard in attempts to recollect memories from my childhood. The few I recalled were much similar to what he was going through.

Every day, I grew to enjoy Charlie’s company. Although I didn’t ever speak to him, I assumed my silence implied that I was interested in listening to him.

Days passed and my condition was worsening. What was once a vibrant voice had grown to become dull and dreary and reduced in its presence entirely. Something was wrong with Charlie. I needed to speak to him.

“Charlie, are you there?” I asked as I shifted towards the curtain. Nothing.

“Charlie? Charlie?” I repeated. No response. I pushed myself off of the hospital bed, forcing myself up. I dragged my medical oxygen machine and reached the blue curtain. My fingers grazed over it feeling the roughness of the curtain. I pushed it aside only to discover an empty bed.

I woke up to several blurry faces hunched over me. My eyes slowly pried open. I squinted and tried to assess my surroundings. All I could see were the curtains that surrounded me; except, these weren’t blue. I looked around frantically as my heart rate began to soar and my throat began to close. Doctors and nurses crowded around me and slipped me into an oxygen mask.

“Where is Charlie?” I cried although I couldn’t muster up the energy to do so. Tears seeped from my eyes, soaking my face

A stout nurse pulled back the curtain. A child. A child engulfed in tubes, wires, pipes, and IV’s.

“Take me to him,” I demanded of the nurse. My bed was moved next to his. I reached my hand over and took his in mine. His small, warm hands fit perfectly into mine. I stroked them and wept, my body heaving and throat closing with every shudder. Charlie’s eyes pried open and he stared straight at me. My heart leaped. He was still with me; more importantly, I could see him.

His auburn hair and defined facial structure were just as I had imagined.

“I’m sorry Charlie,” I pleaded. The monotonous beeping of machines sounded up the room.  “It’s alright, No,” he responded using the last few breaths he could muster up. I let out a lethargic giggle and smiled weakly at him.  I clutched his hand and stared into his eyes. At that moment, I came to a realization: he was infected as well. Pools of tears began to fill my eyes as well as his.

“Breathe with me,” I said to Charlie.

We breathed in unison, hands enveloped. We were in solidarity; united whilst fighting against the virus.

Just like most people, the COVID-19 pandemic changed Thanksgiving plans for the tenants of Project Freedom at Hamilton.  Traditionally, many of them attended a Thanksgiving early dinner hosted by the congregation of the Resurrection Lutheran Church in Hamilton Square, but not this year.

Determined not to let Thanksgiving go by without the traditional meal at least, the staff of Project Freedom at Hamilton decide to cook a meal for nearly 75 people. But where to get that much food?

Simple. A call went out on Facebook, and turkeys and other food items came rolling in almost daily.

Under the cooking direction of Chef Savannah Green, Recreation Coordinator, and the “organizational” direction of Melinda, Project Freedom staff provided a container of turkey, stuffing, sweet potatoes, cranberry sauce and string beans to the tenants of both properties.

The remainder of the food donations that we did not use will be distributed to the needy tenants at both properties.

“All of us are so thankful for the opportunity to spread some love and cheer to our Project Freedom tenants,” added Savannah

Happy Thanksgiving and Happy Holidays to all!

In times of disasters and national emergencies, individuals and organizations have always stepped in to fill the gaps in the response. The COVID-19 response has been no different with individuals making masks or going shopping for people who cannot get to the stores safely.

This  support was exemplified by the  Princeton Corridor Rotary Club. This long-time supporter of Project Freedom sponsored $1,500 of groceries for the tenants.  In the past, this socially-minded club supported the acquisition of a generator for Robbinsville.

Meanwhile, Project Freedom tenants in Robbinsville, Hamilton, and Lawrence were lent a helping hand by the Jewish Family and Children’s Services (JFCS) of Greater Mercer County.

JFCS is a nonprofit community service agency with a mission to strengthens individuals and families by empowering people to care for themselves and others.  Family Resources are available including an on-site health food pantry and a wide network of community partnerships.

The JFCS Mobile Food Pantry Truck  began bringing the resources of the JFCS brick-and-mortar pantry to distribution sites in Mercer County since January. The 16-foot truck is a healthy-choice food pantry that for people with food security issues in Mercer County.

The pantry-on-wheels delivered bags of fresh food in Wegmans’ reusable shopping bags to tenants in Robbinsville and Hamilton. In the following weeks, the truck visited the Lawrence complexe as well.

Another community organization, Arm In Arm, also delivered food to Lawrence, Hamilton, and Robbinsville tenants on a regular basis.  Formerly known as The Crisis Ministry, the  organization founded in 1980 by leaders of Nassau Presbyterian Church and Trinity Church in Princeton to help community members who were struggling financially.

Today as Arm In Arm, 20 staff members and hundreds of volunteers welcome more than 4,000 families to its food pantries and other support services. 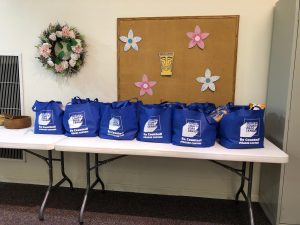 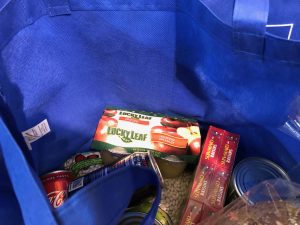 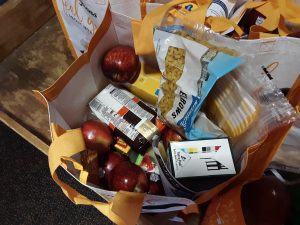 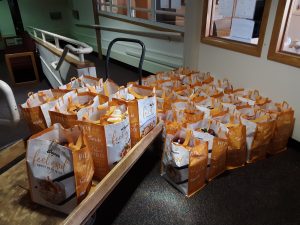 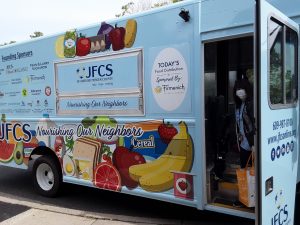 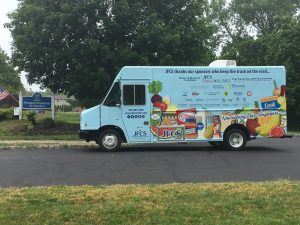 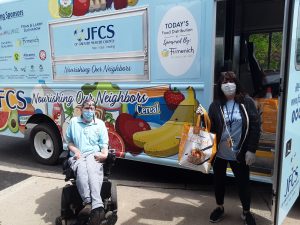 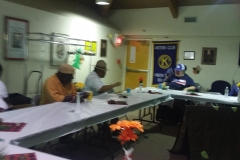 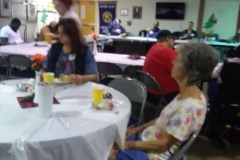 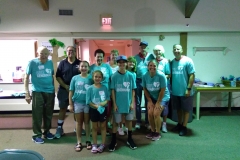 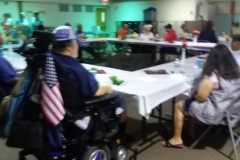 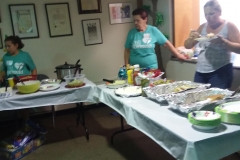