It is May!  It is time for my annual rant as we near Hurricane Season.

It is time to focus on the looming hurricanes season and the predictions by the Colorado State University tropical study program.  This year is no different—especially because we are in the tail end of the first wave of a pandemic.

Yes, I wrote “the first wave.”  Historically, pandemics come in three waves, and the severity of those waves vary.  Dr. Anthony Fauci, the director of the National Institute of Allergy and Infectious Disease, has already stated that the next wave of COVID19 will hit this Fall and will be more severe.

Fall is also the peak of hurricane season, and the idea of a major hurricane crashing into to the US during another severe wave of COVID19 is frightening.  But it needs to be anticipated and planned for with the     lessons we have learned the past three months. We have already seen tornado rip through states this past month complicating the fight against COVID19.

As I write this, the American Red Cross is sheltering nearly 900 people in four states hit by tornados.  Luckily, hotel rooms were available for a better sheltering option than public schools during this outbreak.  Imagine Super Storm Sandy happening now or a major extended power outage.

So now is the time to prepare for both the second wave and foreseeable disasters as we look to opening back up again. If you realized that you should have done a specific task or tasks before the COVID19 shutdown, use that knowledge to prepare yourself better for the next wave and other potential disasters.

That prediction came true over five years ago with Hurricane/Super-Storm Sandy slamming into New Jersey.  This year’s predictions by Colorado State University’s team, now his for a “slightly below” average season for 2019.

This is the 37th year that the  hurricane research team at the Department of Atmospheric Science, Colorado State University has issued the Atlantic basin seasonal hurricane forecast.  Dr. William Gray, Ph.,  launched the report in 1984 and continued to be an author on them until his death in 2016. He team is now headed by Dr. Philip J. Klotzbach.

A total of 16 named storms with eight hurricanes and four of them becoming major hurricanes.

Last year’s prediction was 13 named storms, five becoming hurricanes, and two reaching the major threshold. Thus, the prediction for this year is for more storms with a greater potential of severity.

The actual number for the 2019 season was 18 named storms; three of these storms turned into hurricanes with two being “major” in power and scale.  So they under-estimated the number of storms but overestimated their severity.

The prediction also estimates the probabilities of at least one major hurricane making landfall:

With this year’s prediction in mind and remembering what we have just gone through, it is not too early to start thinking about severe weather and being prepared for it.  The first step is being more aware of both the potential threat and the “emergent” or imminent threat.  Here is what FEMA recommends that people with disabilities do to address that need. 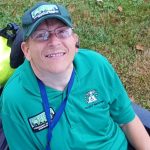 This month you will be reading and hearing more about the emerging outbreak of Coronavirus-2019 (officially named COVID-19). The situation is very worrisome—especially if you have a disability.
Nevertheless, one of the key responses to this type of situation is getting accurate information and trusting the source of it.
I’m going to be blunt about this: The “tinfoil hat wearing wingnuts” are out there already with disinformation to fit their own agendas or mania. These theories are fabricated using facts, half-truths, and outright lies woven together to fit any point of view about health issues or politics. They can be laughable except these flights of fantasies will obscure the correct information and messaging needed to keep us safe and well.  Misinformation is disruptive and will lead to people dying.

I saw one tweet that contained a claim that was not true, and the link for more information redirected me to an online store to buy masks, but then I saw another tweet dismissing the use of masks.  People are trying to make a quick buck from the outbreak, and people are trying to scare us for their own pleasure.

My message is this: Do not rely on Facebook or other social media to for information to make urgent health decisions!

Your Facebook friends may be  good sources for gossip, recipes, sports trivia, or where to go fishing, but accurate information in these situations may not be a Facebook post shared a zillion times.  The quantity of shares or views does not indicate the quality or accuracy of the information.

Sadly, even our elected officials can pass on erroneous information that they may have heard or read from an unreliable source. It is easy to pass on tainted information as you try to appear to be on top of everything, and it is hard on the ego to appear not to know authoritative information.

By the time you read this, any accurate information that I can pass along will be outdated and may be inaccurate.  Personally, I rely on the Centers for Disease Control and Prevention (CDC) for information, I check CDC.gov daily for updates.

Several of the 88 people killed in the Camp fire that devastated Butte County, California, in November had disabilities.

Their deaths were only the latest example of a tragic reality: When disaster strikes, people with disabilities are disproportionately affected. There are no statistics that show how many disabled people in the US say they could easily evacuate in an emergency, but around the world, just 20 percent of disabled people say they would be able to do so. And only 31 percent said they would have someone to help them in an emergency, according to a 2013 United Nations global survey.  Click Here to read more. 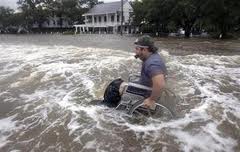