This month marks seventeen years since the attacks of September 11th.

For many, the memory of that awful day is fading, but my memories are vivid down to my shirt and tie.  The day started out so bright, beautiful, and refreshing and  ended so dark and frightening.  September is also National Preparedness Month when preparedness experts try to catch your attention to prepare for another, inevitable, dark and frightening day.

Every year since the attacks, I choose to honor three fragments that create my memory of that day.  First, I honor the life of my friend and colleague Colleen Fraser who died on Flight 93 with those other selfless heroes who may have saved the Capitol or the White House or thousands of other lives.  Colleen was a fighter, and she was in good company that morning fighting to take back that plane.

And, yes, thirdly, I remember those people with disabilities who died that day in those towers.  I was not     watching the horror on television that morning.  I had a meeting at 10 o’clock and during that meeting I spoke of Colleen and wanting to connect her with someone.  Later, someone told me of the collapse.  My very first thought was that many firefighters had just died; my immediate second thought was that many people with disabilities had died as well.

Let us all remember the victims and the heroes of September 11, 2001, by getting prepared and staying  prepared.  You never know how a bright, beautiful, and refreshing day may end.   Check out my Emergency Preparedness Desk page on this site by clicking here. 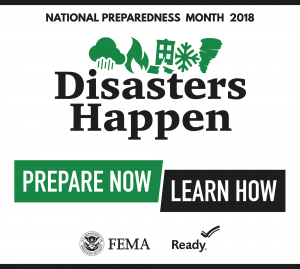